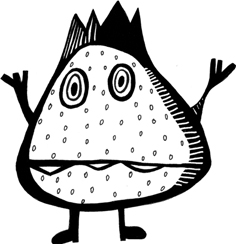 Approximately 350 squirts from a cow’s udder yield one gallon of milk.
The word "cereal" comes from the name of the Roman goddess Ceres. She was considered the protector of wheat and other grains.
Strawberries are the only fruit that has seeds on the outside.
A ripe cranberry bounces. A spoiled cranberry doesn't.
Corn always has an even number of ears.
For many years in Britain, tomatoes were considered to be poisonous.
Romans shook salt on lettuce and called the new dish herba salata, or salted greens. In the USA, we call this “salad.”
In ancient Egypt, the onion's round shape and layers symbolized eternity. For this reason, onions were often buried with Pharaohs.
Archaeologists tasted ancient honey that they discovered in an Egyptian tomb. The honey was still edible.
Water freezes at 32 degrees Fahrenheit and boils at 212 degrees Fahrenheit at sea level.
Peanuts are one of the ingredients of dynamite. (More specifically, peanut oil can be processed to produce glycerol, which can then be used to make one of the central ingredients of dynamite.)
Ancient Mayans probably created the first chewing gum when they boiled and chewed the sap of the sapodilla tree.
Bubble gum flavor is actually a combination of wintergreen, vanilla and cassia, a form of cinnamon.
The microwave was invented after a worker walked by a radar tube and his chocolate bar melted in his pocket.
Natural vanilla flavoring comes from a flower called the orchid.
One night, an 11 year-old boy left his drink outside. A stirring stick was also in the cup. In the morning, he found his beverage totally frozen. The boy, named Frank Epperson, had invented the first Popsicle!

Or You can Buy the Paperback!

Ruth
Long ago, in 1992, I started the Delta of Venus Coffeehouse and Pub with my best friend. Many of the recipes in the book "An Alien Robot's Cookbook" harken back to those delicious days.
Now I live with my sons and husband Roger in Muir Commons, the first cohousing community built in the United States. Each month, we get to cook for a big group of neighbors. This has provided a great testing ground for new recipes. My older son Gabriel illustrated "An Alien Robot's Cookbook." When I saw his awesome sketches piling up around the house, I begged him to let me digitize and embellish them. Lucky for us, he said "okay."
My other interests aside from writing and eating, include drawing, making ceramic sculptures, creating domino magnets and jewelry, and studying psychology. I also love crossword puzzles. My book "Pre-Paxil Poetry" is a collection of my writings.